Your browser may need to be refreshed after the live stream starts for it to begin streaming. 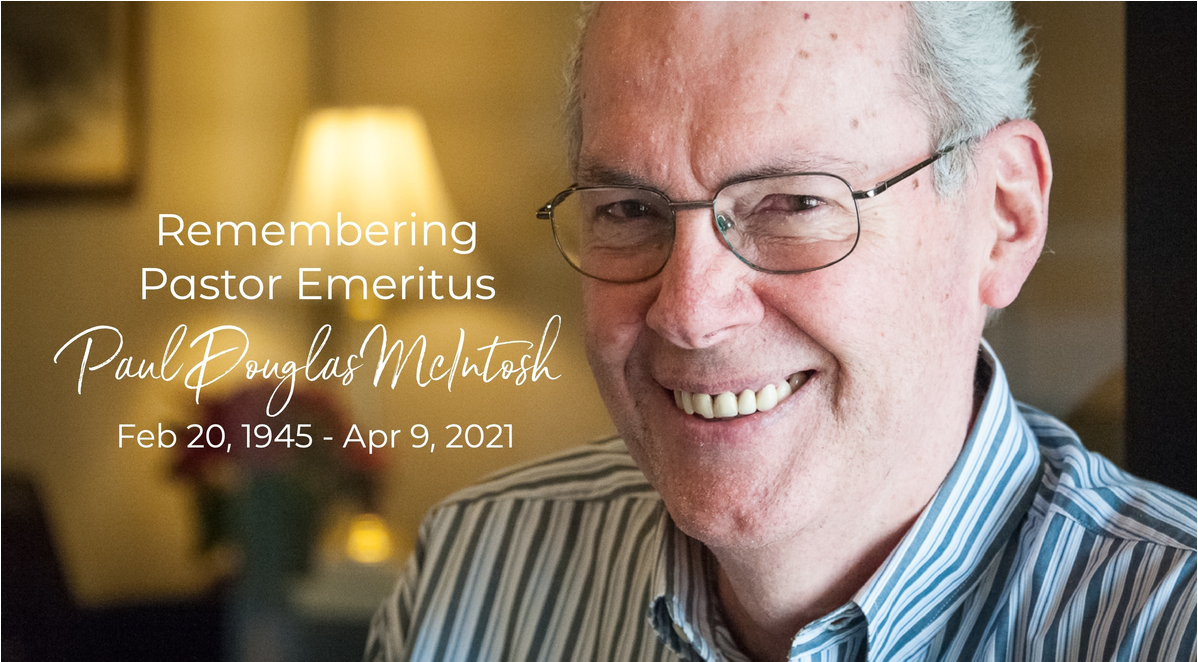 Paul Douglas (Doug) McIntosh, 76, of Atlanta, Georgia, passed away on April 9, 2021 after a long illness. Born in Oneida, Kentucky to Paul McIntosh and Maryetta Catherine (Mary) Bates, he was a man of exceptional intellectual ability, a two-time NCAA basketballchampion,a 50-year pastor of a church he planted, and a devoted husband and father.
An impressive growth spurt between Doug's sophomore and junior years of high school led Harold Storm, the basketball coach of Lily High School, to recruit Doug to the basketball team. When his athletic gifts were made known tothe scout for the Bruins at University of California at Los Angeles (UCLA), Doug was recruited to play for legendary basketball coach John Wooden,where he assisted the team in securing two NCAA championship titles.John Wooden was later asked about the best player he ever coached. The coach replied that Doug McIntosh got more out of his abilities than any player he ever coached,and was thus the finest player to ever play for him.

At UCLA, Doug met and married Cheryl (neé Stocker)in 1966. The following year, he loaded most of their worldly belongings into a 4x8 U-Haul trailer and relocated with Cheryl to begin his graduate work at Dallas Theological Seminary (DTS).The curriculum at DTS called for intensive study in Greek the first year. Doug and his classmate Tim Crater re-purposed a set of Scrabble tiles with hand-drawn Greek letters in order to practice vocabulary for their New Testament class. At DTS, under the tutelage of professors like Charles Ryrie and Howard Hendricks, Doug fell in love with exegesis,which involves careful analysis of biblical passages. His love for exegesis would shape the rest of his life in ministry.

After graduating from DTS with a ThM in Semitic Languages and Old Testament Exegesis, Doug and Cheryl relocated to Atlanta with Tim and Sherry Crater, with an informal plan to start a non-denominational church. The gathering that started in the basement of Joe and Pat Dorsey in Tucker, Georgia would become North Atlanta Community Church and later Stone Mountain Community Church (SMCC).

In 1985, ground was broken on SMCC, which later became Cornerstone Bible Church (CBC). Doug believed that opening up the Word of God each week for his church congregation was one of the greatest privileges of his life. Devoting hours each week to careful contemplation of Scripture, he memorized lengthy passages of Scripture and internalized the teachings of Jesus. Scriptural cadences colored his speech, his writing, and his outlook on life.

An insatiable bibliophile, Doug read thousands of books over the course of his life and maintained an astonishing recall of their contents. His favorite subjects were biblical scholarship, historical biographies, and American history.

His reading informed his entire ministry. Over the 1980s and 1990s, his parent church, SMCC, planted five daughter churches in Georgia and South Carolina. Doug's passion for unlocking the truth of God's Word led him to teach almost anywhere he was asked, including Carver Bible College in Atlanta, where he met and mentored a young Tony Evans, who went on to become a globally influential pastor. He also taught seminary courses at Atlanta’s Columbia International University.

Doug was wholeheartedly devoted to his wife, Cheryl, and to their three children. He was a loving father who seized every opportunity to thoughtfully nurture his children's character, build their vocabulary,and enrich their understanding of the world.

In 1982, Doug acquired a D.Min from Trinity Evangelical Seminary (Chicago). His ability with the biblical languages was recognized by Wycliffe Bible Translators. As a member of Wycliffe’s board, Doug traveled to Nigeria, Indonesia, and Kenya for pastoral care and translation consulting.

The Atlanta Braves were a beloved passion for him and his sister Debbie. One of the most delightful moments for Atlanta sports fans came on October 14, 1992, when first baseman Sid Bream scored the run that sent the Braves to the World Series. The joyful hoot Doug let out as Bream slid into home is still the stuff of family legend.

Doug's Bible-teaching ministry left him with dozens of stamps in his passport. He led regular trips to the Holy Land and baptized believers in the Jordan River. Later in his ministry, he published four Bible study and reference books, including God Up Close, LoveFull Circle, The War Within You, Life's Greatest Journey,and several Biblical commentaries for LifeWay Christian Resources.

He served at various times as a church planter, senior pastor, seminary instructor, Bible translation exegetical consultant, author, conference speaker, and Bible teacher. He retired from full-time ministry in 2017. A massive collection of his Bible studies, sermons, and theological resources is archived on his website, Gleanings (DougMcIntosh.org). He is survived by his wife Cheryl, his brother David, his sister Deborah, and his children Tim, Carissa, and Scott.

Doug will be remembered for his love of God's people and God's Word. In lieu of flowers, the family requests donations be made to Cornerstone Bible Church at 869 Cole Drive, Lilburn, GA 30047, or Wycliffe Bible Translators at P.O. Box 628200, Orlando, FL 32862, in memory of Doug McIntosh.